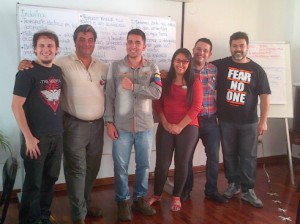 During day 2 of the climate change seminar for young transport workers in Latin America participants heard from international speakers from Norway, USA and Spain. They shared their unions’ experiences of taking action against climate change. These unions, also affiliates of the ITF are in Lima attending the UN climate change talks, COP20 and the union and social movement events that are running in parallel.

Asbjørn Wahl (Municipal and General Employees Union, Norway and chair of the ITF climate change working group and chair of the ITF urban transport committee) called for a unification of the climate struggle with the social struggle. He emphasised the importance of unions supporting young workers who invigorate action and campaigns on climate change and social issues.

Ed Watt (Amalgamated Transit Union, USA and vice-chair of the urban transport committee) spoke about how his union has engaged with members, passengers, local communities, environmental groups and other social organisations to advocate for public transport and renewable energy.

Francis Cabezos (CCOO, Spain) shared details his union’s work on sustainable mobility, which includes a practical guide for unions, research reports, education and campaign materials. CCOO also campaigned with workers at the airport in Barcelona for them to have good public transport for their commute to work. The union has developed proposals demanding that the government takes action on mobility, promoting renewable energy and modification of the electricity sector.

The discussion that followed included debate on what activities on climate change would be possible for the unions present and how unions work with other organisations and government and what the potential challenges and risks might be of doing this.

What can unions do?

Following the panel discussion, Emiliano Addisi (ITF Americas education coordinator) discussed with the participants suggestions for action unions can take on climate change. The participants then worked in groups to develop plans for their industrial sectors, workplace and community. They reported their discussion in plenary.  It was agreed that it was really important to continue to build the network of climate change activists from ITF unions within the region and globally.

To conclude the seminar, Emiliano Addisi presented the ITF’s programme on climate change and there was an evaluation of the training.

All the delegates participated in the people’s climate march the following day. Click here to watch Edwin Labrador, FBTTT reporting from the march (in Spanish).