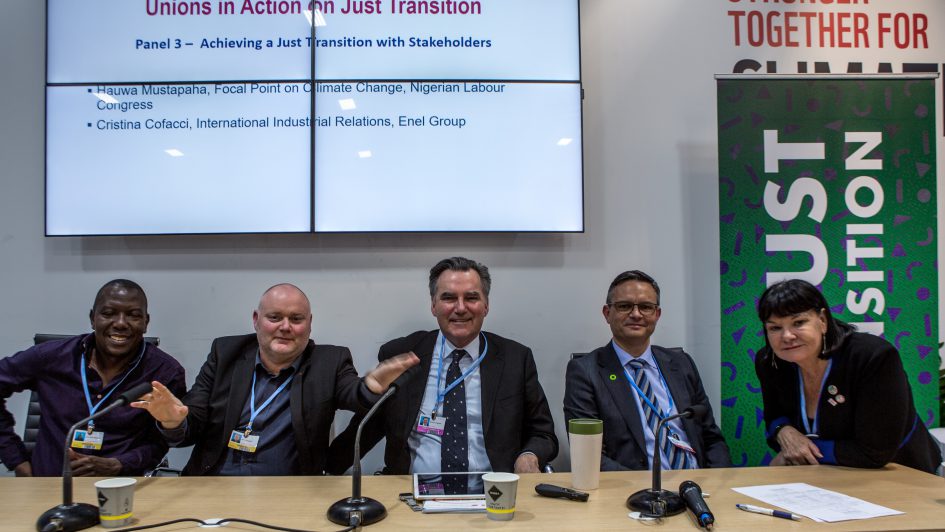 Unions in Action on Just Transition was one of the events held at the WWF Pavilion at COP24 in Katowice, Poland and was organised by the ITUC’s Just Transition Centre and the Canadian Labour Congress event.

John Mark Mwanika, ITF urban transport chair, was part of the second panel on Just Transition. He spoke about the ITF’s OPT (Our Public Transport) programme strategy of building industrial and political power of transport workers in order to make public transport meet the needs of the majority. He highlighted the work the ITF is doing in Bangkok on organising and in Nairobi how the ITF is focusing on influencing mass transport implementation.

The ITF is committed to a Just Transition and supports the C40 Cities ‘Green & Healthy Streets’ Declaration and commitment by city mayors to procure zero emissions buses by 2025. The ITF believes that if bold commitments like this are implemented within a Just Transition framework this can lead to creation of quality jobs! As unions and workers we need to fight back for a democratic ownership of public transport.

In Canada they already have a national task force on Just Transition and during the panel discussions the government minister emphasised the important role workers and trade unions are playing in the Just Transition process.

If you weren’t in Katowice, you can watch the event here.