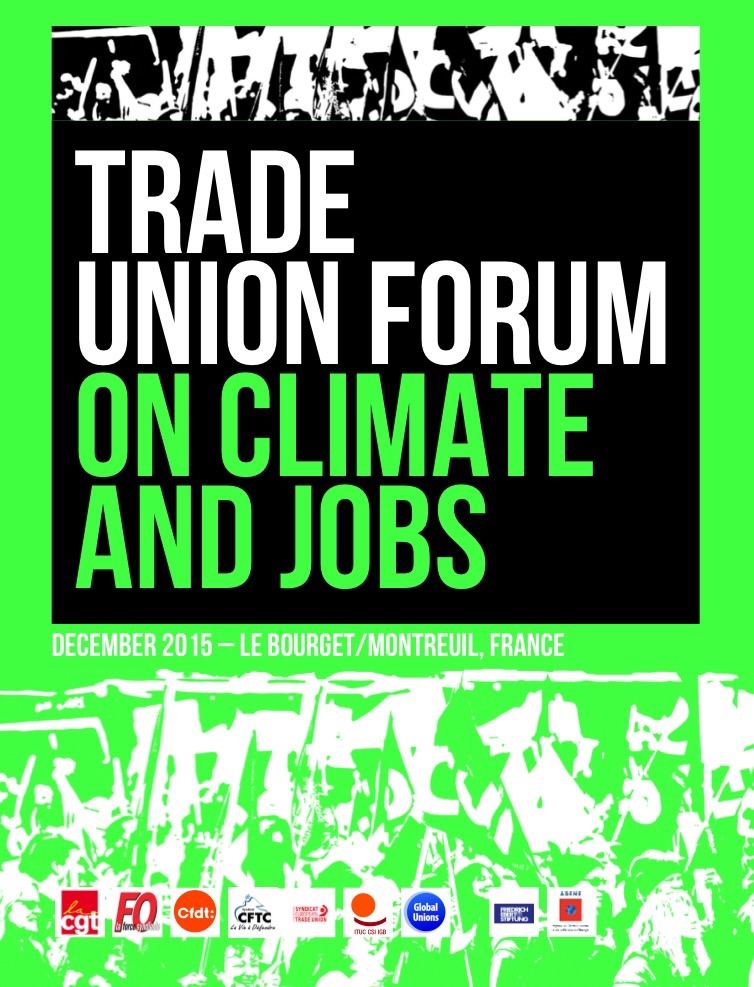 The trade union forum on climate and jobs was opened by the ITUC with IndustriALL. Most of the global unions were also present and support the need for leadership on climate action.

The ITUC gave updates on the climate negotations taking place and warned of the risk of ‘just transition’ being removed from article 2 of the Paris agreement. By the end of the afternoon, we found out this was true and ‘just transition’ has been moved to the preamble of the agreement, giving it much less weight.

Many union-run sessions are being organised over the two days at the Generations Climate’, a space next to the main negotiations for environmental organisations, indigenous groups, other NGOs and trade unions. More union activities will be held at the Citizens’ Summit over the weekend, which the ITF will be reporting on, so just a sample of the events today are included here. 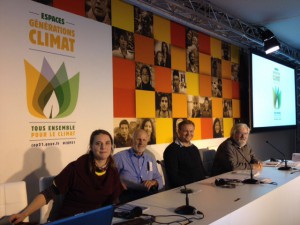 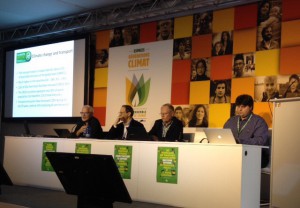 The ITF’s event ‘reduce emissions! perspectives on expanding and improving public transport’ had 3 speakers from ITF affiliates. Asbjørn Wahl from the Norwegian Union of Municipal and General Employees and chair of the ITF Working Group on Climate Change, spoke about the need for urgent climate action and how to cut transport emissions through the reduce-shift-improve model. Quoting from the ITF / UITP joint statement on climate leadership he stated that “public transport has a major role to play in controlling and reducing greenhouse gas emissions”. He called for unions to acknowledge the failures: climate policies that haven’t reduced emissions, deregulation, privatisation, market orientation, fossil fuel subsidies, externalisation of costs, lack of land and urban planning, that have prevented the necessary political action.

Public transport has to be brought under public, democratic control, with investment and expansion of infrastructure and systems, all external costs have to be internalised in all transport, all fossil full subsidies abolished and as public transport is improved, private cars must be restricted. Asbjørn also called for long term land use/urban planning to reduce transport needs and broad social alliances for PT have to be built.

Bruce Hamilton, international vice president of the ATU (Amalgamated Transit Union of USA), said that “organised labour is well positioned to lead on climate and create a just society.” At the ATU they have built alliances with drivers, riders and local communities and carried out basic training with 1000s of local union leaders and activists on this organising of drivers and riders with the local community. This one-to-one organising is key.

Bruce called for unions to develop strategies for the expansion of public transport, as part of a transition to a zero-carbon future. He said “we know what the problem is, we know we have the solution, we don’t yet have the political will!”.

In Sweden, Janne Ruden and SEKO (Service and Communications Employees Union’) have been fighting against rail privatisation and social dumping. Privatisation and a lack of investment have increased the risk of accidents on the railways. He called for urban transport to be publicly-owned and smart.

In the Q&A session that followed, a representative from Unite warned that unions across Europe were at risk from the UK model of rail privatisation, as in Sweden there was support for building alliances with other organisations. There was a discussion over investments in only buses or BRT models and there was a support for transport to be a public utility in all countries.

The last session was a dialogue between Canadian politicians, trade unions and civil society on climate jobs. The event was opened by CAN (climate action network) and the Canadian Labor Congress, who call for a target of the creation of 1 million climate jobs in 5 years. Unifor emphasised that as trade unions and social activists we have to make sure that the transition is fair and just, and that this is a big task: “Lets be honest, it’s not transition, it’s transformation!”. These changes will bring new opportunities and benefits for communities and workers if this is done in a fair and just way. We need to invest in a new economy and invest in working people and it is our members know how to make the transformation work. Because of the Tar Sands oil, there was recognition from the politicians present that the transition to a low-carbon economy has to be done in collaboration with the workers in Alberta . A representative from the Tar Sands workers said that for the transition to be just “we have to get our members real jobs and we want to be part of the solution”.

On leaving the Climate Generations Areas and the main COP21 venue, trade union leaders, NGOs, environmental activists and government delegations piled into bendy buses carrying us efficiently and quickly to the metro and our hotels.