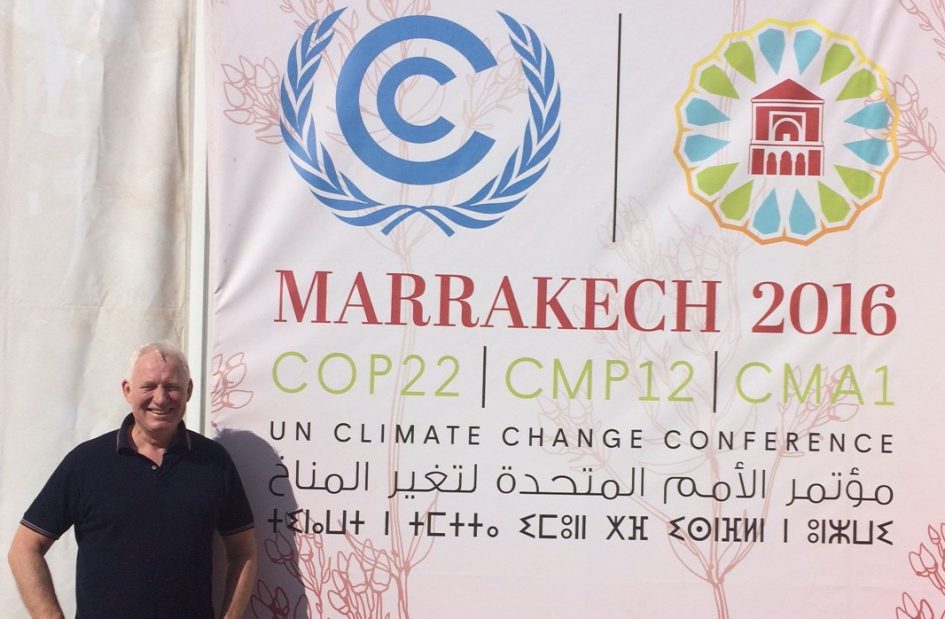 I have just arrived to a nice, warm and lively Marrakesh. A big contrast to Sweden which I left early this morning, where we have had a lot more snow than normal for this time of year, even in the southern parts of the country. In Stockholm there is chaos on the roads, as we have had nearly half a meter of snow in one day, which is a record for this time of year. Cars, airplanes and transport have come to a complete standstill and many lorries are stuck in the snow.

People are stuck in their cars for hours without being able to get to work or home. According to climate researchers there is an obvious trend which shows that extreme weather conditions are on the rise and will increase all over the world because of climate change.

The day before I left my hometown of Gothenburg I attended a preparatory meeting with several known climate researchers. We discussed the enormous problems and challenges that we are up against, not least within the transport sector. In Sweden, one third of all emissions come from the transport sector. Despite an increase in the use of biofuels the emissions from traffic have increased during the last year. The main reason is that there is more traffic and people drive longer distances. The number of passengers using public transport has unfortunately not increased as expected. Another worrying development is that the emissions from aviation are increasing drastically. The emissions that come from Swedish people flying abroad are now the same as all of the emissions from personal car use in the whole country and this is expected to increase over the next few years. It sits ill with the government’s climate ambitions, for example, that Sweden should have a vehicle fleet that is not dependent on fossil fuels by 2030 and that we will reduce our emissions by 80% in just over a decade. This means that as of next year the speed of reducing emissions will have to be cut by 5-7 per cent each year if we are to succeed.

This is why the meeting in Marrakesh, perhaps the most important COP meeting ever, even more important than the COP21 meeting in Paris. It was in Paris that all the countries in world agreed on the ambitious goal to limit global warming to 2 degrees, with a view to get 1.5 degrees.

Now all the countries in the world must move from words to action and the global North, which historically have been responsible for the biggest emissions, have to take the lead and show the way to a sustainable and fair world.

As I was greeted by the heat on my frozen body when I arrived in Marrakesh, shivers went down my spine when I heard about the news that Trump had won in the American presidential election. Having a climate sceptic and ‘psychopath’ in charge of the world’s biggest superpower will increase the risk that we will not only fail with future challenges, but also destroy what we have already achieved. Trump has clearly stated that de does not believe in global warming and that he will re-open coal plants and tear up any agreed decisions. Unfortunately there is a risk that more “Trumps” will appear in other countries if we are not successful in evening out the inequality in our society. The environmental transition has to go hand in hand with the social and economic transition. With a growing income gap and without a just transition, there is a risk that the workers that might be affected by this change won’t support us, but instead support a politician like Mr Trump.

This is why all progressive forces must come together now and show that we do not accept anything but a fossil free world, and consumption and growth that is within the planets limits. Politicians, the public and the civil society and not least the trade unions of the world must get off their comfortable sofas and climb the barricades to show that another world is possible. Trade unions must become activists again; it is not enough to write on Facebook, press Like and Tweet. If we are to succeed we have to work across borders. We can no longer work and fight on our own. Trade unions, environmental organisations and others in the civil society have to walk side by side and give direction. Of course it is important what you as an individual do, as you can become an example for others and show them the way. But it is not enough if we are to succeed with changing the system.

We have to fight the privatisation of our public assets and amongst other thing take control of the energy sector. The government in Morocco has invested heavily in solar power despite not having a lot of resources. We could do the same in many other countries. Local communities, cities, cooperatives and individuals could, with the help of government funding, become self-sufficient using green energy from the sun and wind. Then the fossil fuel industry would have less power over us and the necessary transition would be much quicker.

The positive side to this can be found in the simple solutions and not in the technological innovations which global capital likes to talk about, even if all of it might be needed. The car traffic in cities could immediately be limited to 25% through state and municipal instruments. Around half of all the people who live in cities in Sweden travel less than 5km to work. This would stimulate more green transport not least within public transport. By doing this we would also create many new jobs in public transport and services. Not least, there would be lots of space in our car factories to be used instead to build trams, cable car links, trains, electric vehicles, solar panels and wind turbines to name but a few.

For us to be able to limit global warming to a maximum of 2 degrees, countries must drastically increase their ambitions and commitments in accordance with the Paris agreement. An ambitious action plan with concrete measures will at the same time provide more jobs than the ones that we lose. At the same time this readjustment will have to be done in a just and fair way for those workers concerned. Last but not least, we have to be prepared to follow through with the plan for a green climate fund to support countries in the South. The $100 billion which will be put aside each year for this fund should not be the ceiling but the base for support.

The ITUC will push for these demands during the climate meeting in Marrakesh. We cannot give up the thought that another world is possible.