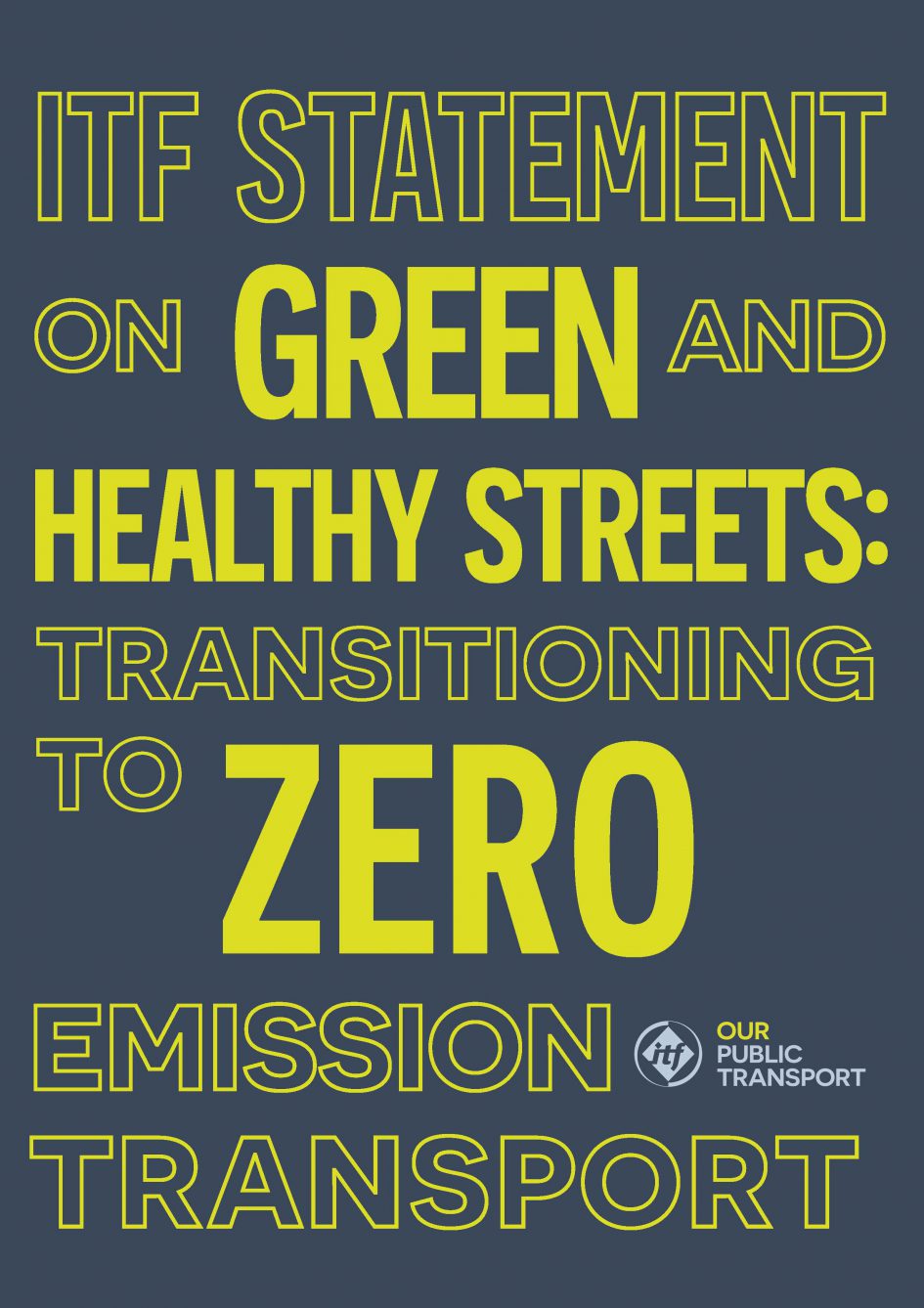 As a global union federation representing over 20 million transport workers in 145 countries worldwide, the ITF is proud to be leading a programme for Our Public Transport. We recognise that if we act NOW, there is still a chance of stopping dangerous climate change. Expanding public transport is an essential part of the fight to bring down greenhouse gas emissions and address climate change. Bold policies are needed, adapted to specific national and city contexts.

The ITF supports the C40 Cities ‘Green & Healthy Streets (Fossil-Fuel-Free Streets) Declaration’ and the commitment by mayors of pioneering cities around the world to procure, with partners, zero emission buses by 2025 and ensure that major areas of cities are zero emissions by 2030. These are bold commitments, which we congratulate, acknowledging that the most effective way to implement them is through a process of just transition involving job creation, decent work and quality jobs, and social security schemes which safeguard people’s livelihoods and social and human rights.

The ITF recognises that public transport needs to become more energy efficient and with lower emissions. When the principle of electrification is applied with the decarbonisation of the electricity supply, big gains in emissions reductions will be achieved. As a labour movement, we support policies which will result in improvements to the daily lives of low income and marginalized communities. Working class urban neighborhoods are often close to high traffic and industrial areas. Dirty air in cities, and the health problems which come with it, disproportionately affect these neighborhoods and the people who live in them. Public transport workers themselves are exposed to high levels of risk from air pollution as a result of long-term occupational exposure.

Achieving zero emissions in cities is only possible with an immediate and ambitious expansion of affordable, abundant, safe and reliable public transport globally.

Building the public transport systems of the future can create millions of quality jobs throughout the value chain of infrastructure and transport. It can also bring previously marginalized groups into the world of work and provide more secure and skilled employment. C40’s Green & Healthy Streets Declaration may have positive wider impacts as gender equity can be promoted by attracting and retaining women, and challenging occupational segregation in the sector. Procurement for public transport has the potential to incorporate decent work standards as well as training and apprenticeships for women, youth, and marginalized communities.

In order to realise these objectives, the ITF and its affiliates are ready to play a role in supporting C40’s Green & Healthy Streets Declaration by: