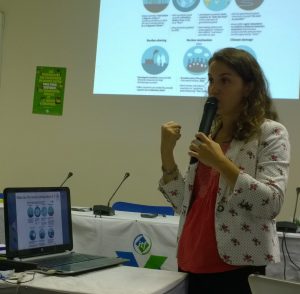 The climate sessions opened with a speaker from UNEP (United Nations Environment Programme). Ines Abdelrazek introduced the issue of climate change and why it is occurring, using the film, Le changement climatique: comprendre ses causes et ses conséquences pour mieux réagir (in French). She talked about the action world leaders are taking in regards to climate change and the Paris Agreement from last year’s UN climate talks (COP21). Ines discussed the work of the UNEP’s transport department, their priorities and projects in Africa and why transport is vital for sustainable cities. She showed a film from the Africa Sustainable Transport forum 2014, Promoting Sustainable Transport Across Africa.

There was lots of discussion with Ines about definitions of climate change and global warming, transport emissions, fuel usage, extreme weather conditions, changing rainfall patterns, adaption, the objectives of COP21 and the regulation of climate policy.

Rhoda Boateng from ITUC Africa presented their priorities on climate change to increase participation of trade unions in climate change engagement, education on climate issues, clear understanding of ‘just transition’ in Africa and ‘green jobs’, encouraging alliances with other civil society organisations and building the capacity of unions to respond to issues of waste management and toxic waste dumping. She also highlighted how young workers can get involved through their national centres.

The ITF’s programme on climate justice was presented by Ali Howes. The ITF has developed an alternative model of sustainable transport: reduce-shift-improve. The programme has been implemented through: awareness raising and education, coordinating work with affiliates on developing alternatives and climate policy, building affiliate leadership through the climate change working group, representing transport workers globally and building influence in inter-governmental negotiations and participating in alliances.

In the afternoon, the participants debated with the speakers issues including climate migration, reduced levels of water, malnutrition, the power of the world economy on energy efficiency, use of new technology and the impact of automation in the transport industry, energy efficient, green jobs and adaptation programmes.

The group work in the final session of the day focused on how the reduce-shift-improve model can be implemented in each of the transport sectors and what the challenges and opportunities are for doing this. There was also a discussion on the impact of climate policy on the different transport sectors. In maritime, the groups discussed the effect of climate policies, the need to ensure that environmental laws are enforced, how to reduce ship waiting time, use of renewable energy, sensitisation of workers, potential job losses and creation such as through the expansion of local industries and building alliances in the local community. The road and rail groups also looked at the sensitisation of workers, as well as how to reduce the number of vehicles, improve fuel usage, the potential for electric vehicles and how to ensure that if drivers loose their jobs how they get first priority for new jobs. The challenges they identified were poor road infrastructure and how emissions standards would be enforced. The aviation group discussed airplane design and energy efficiency improvements, the need for direct flights (particularly in West Africa), clean fuel, withdrawal of old airplanes, the importance of the involvement of passengers and unions using ICAO regulation to put pressure on airlines.

On the following day participants committed to the following action plans: climate sensitisation workshops, targeting young workers, awareness raising of all membership, developing union climate policy, training of trainers and improved communication and coordination with the ITF and other unions in the region.

Click here to read about the other days of workshop which were on building young worker networks and developing campaigning and organising skills.

Thanks to Union to Union for their support of the ITF’s work on climate justice.

Click here for more information on UNEP’s work on transport.