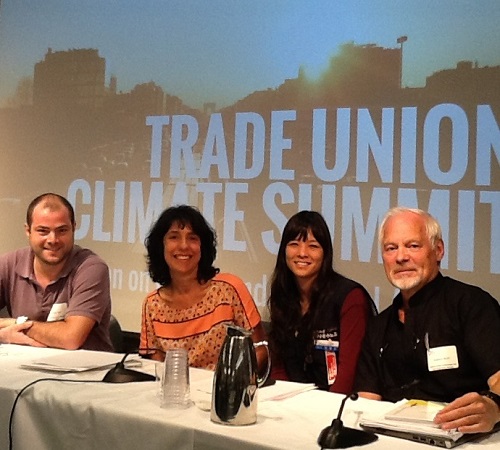 A climate summit was organised in New York last month. It brought together unions and close allies to find ways to help better connect the rising climate movement with the growing global struggle against austerity and inequality. Unions have been playing an important role in both movements, but in most instances fighting for climate protection and building opposition to austerity, low pay and precarious work remain separate struggles. But the potential for building a new and transformational ‘climate and class movement’ appears to be growing.  ITF representatives and our affiliates joined the discussions organised by the Trade Unions for Energy Democracy at SEIU offices on 29 June. The summit comes nine months after the massive People’s Climate March last September in New York, and just 5 months before the ‘last chance’ UN climate negotiations (COP 21) in Paris in December.

Asbjørn Wahl (Union of Municipal and General Employees, Norway and chair of the ITF climate change working group and chair of the ITF urban transport committee) and Wol-san Liem (Federation of Public Services and Transportation Workers Unions – KPTU, Korea) joined the panel on North-South trade union perspectives discussing the need for social transformation to overcome the social and environmental crises. The panel was facilitated by Alana Dave (ITF education officer).

As Denise Fairchild (Emerald Cities Collaborative) said “we need to unpack capitalism and what an alternative society would look like. This is our chance to reimagine an economy that serves all of us and the environment”.  The summit called for a social transformation which includes a just transition, mass education of workers, building broad alliances, campaigns against privatisation and the need for energy democracy, to address the environmental, social and economic crises.

A just transition would enable workers to shift from high-carbon to low-carbon industries, as well as strengthening communities and ensure that development follows a sustainable path.  There would be broad alliances with social and environmental organisations, to build a mass movement fighting for workers and the environment. As market-based solutions of governments and employers have failed workers and the environment, unions should continue the fight against privatisation and call for sectors like transport and energy to be brought back under public control and ownership.

In New York, local unions have been increasingly involved in climate issues since Hurricane Sandy wrecked devastation on the city. As first responders to disasters, the nurses’ unions have included climate justice in their campaigns for health and wellbeing, and use this to educate and mobilise their members. National Nurses United have involved local communities and environmental organisations in their campaign for environmental and social justice, our planet our health.  The ATU have organised workers and passengers around climate issues to campaign for investment in public transport and mobilised many their members to participate in the people’s climate march.

In the lead up to the UN climate negotiations in Paris in December, the ITF will be calling on our affiliates to take action and participate in events taking place globally. Follow the ITF climate justice blog for details.