There are no jobs on a dead planet! ITF unions attend COP20 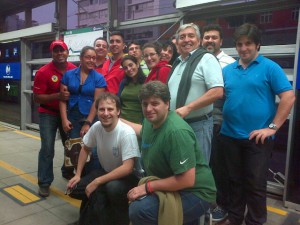 Young transport workers from 9 countries in Latin America participated in the first day of the ITF climate change seminar in Lima, Peru. The seminar takes place as part of the international trade union activities (coordinated by the ITUC) that run in parallel with the UN climate change talks in Lima, COP20.  These 12 activists will also participate in the other trade union events taking place in Lima and the ‘day of action’ demonstration with other social movements on 10 December.

This year the COP is a step towards a new global agreement which needs to be agreed in Paris next year. However if significant advances are not made in the negotiations here in Lima, a new global agreement will be very difficult to achieve. Earlier this year some political developments have affected the context for the discussions: at the UN climate summit in September, there was huge public mobilisation with 400,000 people marching in New York as part of the People’s Climate March and many thousands more in cities around the world. The following month, the European Union agreed more targets to cut emissions and more surprisingly there is a joint US-China statement, where the world’s biggest emitters have committed to work together and announced new targets for each country, for the first time. These targets however fall far below the cuts which are required by science.

The ITF seminar was opened by Emiliano Addisi (ITF Americas regional education coordinator). with an introduction and welcome. Then Francis Cabezos (CCOO environmental secretary) gave an presentation on climate change, the causes and effects, transport emissions and sustainable transport.  He highlighted the need for good, efficient and safe public transport, where different transport modes are integrated across cities. He also talked about ways to reduce freight emissions, with an example of how freight transport has been shifted from trucks to trains, with union involvement.

The plenary discussion on sustainable transport included the issues of ‘public’ transport being often privately owned (e.g. minibuses, collectives), the challenges of behaviour change, the impact of mobility on access to employment and services, the introduction of new transport systems (e.g. Cabletren in Caracas), bike lanes, electronic ‘smart’ cards, bus rapid transit (e.g. Transmilenio) and the risk and contradictions of biodiesel.

The participants discussed their experiences of climate change, with Dina Feller (ITF LATAM network coordinator). Participants noted many climatic changes already in their own countries. For example; flooding, increase in temperature and changes in rainfall patterns (lack of rain, unusual rain in summer, drought). In addition there were examples of extreme weather conditions happening more frequently such as landslides and snow in Guatemala.  Participants also reported increases in diseases such as skin cancer, dengue fever and respiratory problems (particularly for young children). Workers have also noted the impact of these changes on the world of work, with increasing danger for workers, because of stronger winds on ferries, closure of ports and rail services affected by extreme weather conditions.

The final session on COP20 and the UN climate change talks was presented by Juan Carlos Vargas (PLADES), who outlines the role of the IPCC, UNFCCC, COP, Kyoto Protocol and the importance of COP20 and the political grouping of countries – USA / China, BRICS, small island states, independent alliance of Latin America (Alianza Independiente de América Latina y el Caribe (AILAC)) and the G20.