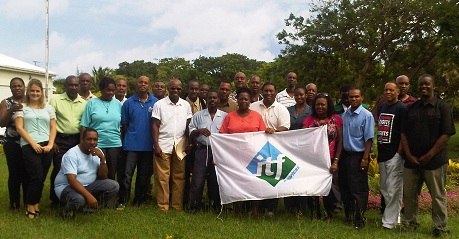 30 transport trade unionists came together in Barbados for the ITF’s first climate change seminar in the Caribbean, including participants from Antigua, St Lucia, Dominica, Bermuda and Guyana. This was the second seminar focusing on low-lying islands, following last month’s workshop in the Pacific. The seminar led to the formation of the ITF Caribbean climate change network, made up of representatives from all transport sectors and each country that attended the seminar. The network will coordinate work on climate change in the region.

The seminar was opened by Sir Roy Trotman, general secretary of the Barbados Workers’ Union (BWU), Ulric Sealy, principal of BWU labour college, Edgar Diaz, ITF Americas regional education coordinator and Ali Howes, ITF education department. The opening was attended by the local press. The participants were welcomed to the labour college which believes that workers’ education must seek to develop workers to their fullest.

Sir Roy Trotman highlighted the importance of uniting as unions in the Caribbean to support each other. He called for the use of tripartite social dialogue to overcome the economic and environmental crises. While the Caribbean is made up of small islands states, they have an ability to punch above their weight politically. Trade unions must start the conversation on climate change to show comradeship with other workers around in the world and work together to reduce emissions and improve resilience to climate change. Workers, with further training, will be able to demand decent working conditions, that also benefit the environment and that leads to change in the community and greater respect for the environment.

Dr Andrea Sealy, meteorologist from the Caribbean Institute for Meteorology and Hydrology (CIMH) gave a presentation on the impact of climate change on the Caribbean. She explained the climate predictions and modelling for the region and impact on those living in the Caribbean. They anticipate that there will be up to 80-100 extremely hot days per year and over 200 warm nights per year (above 25 degrees at night is uncomfortable) and the impact on agriculture, fisheries, biodiversity, water resources (including the underground aquifers), coastal areas and tourism. She also emphasised the need for regional research, rather than just looking at global averages to be able to develop suitable responses for the Caribbean region.

The participants then discussed their experiences of climate change in groups, which included changing weather patterns, increased health problems (dehydration and waterborne diseases), flooding in urban areas, effects on agriculture and fishing, a greater dependency on air conditioning in homes and vehicles and erosion of beaches.

The panellists discussed the issues important for Barbados: the importation of most food products, high population density, pressure on agricultural land, new pests and diseases. They also looked at the alternative energy sources that are available such as solar power and natural gas to fuel vehicles, reuse and recycling of waste products (such as tyres) and strategies to reduce traffic congestion such as the promotion of public transport. There was a question on the environmental levy  in Barbados, which seems to be another government tax, but which is not ring-fenced for environmental spending.

In the afternoon, participants were shown a film by SustainLabour called ‘Time to tackle climate change’ which looks at why unions should be addressing the issue.

The next session looked at transport and climate change: understanding the employment issues and included a presentation from Ali Howes, ITF education. She looked at the potential for ‘climate jobs’ in public transport and improve vehicle efficiency and what impact these would have on transport workers.

The group work that followed identified ways to encourage the use of public transport (public campaigns, free service for children and older people, better facilities such as air-conditioning), improved maintenance and operation of vehicles (speed limiters, auto-switch off), adjusting bus schedules. In the ports the workers explained how they had switched to greener lighting, how electric generators are used while ships are in port, auto-shut off for trucks and the potential for electric straddle carriers and improved disposal of waste products from ships. In addition there were discussions raised about the communities that live around the ports and that by improving conditions in the ports can help protect local people as well as the damage and hazards are not just contained in the workplace itself.

The third and final day focused on developing union campaigns on climate change. Ali Howes, ITF education department gave a short presentation on what unions can do and the participants divided into groups by industrial sector (road transport, port and aviation). The campaign plans included the following:

Raise awareness of members and community

Develop the issue within the union

National and regional government and other stakeholders

Islands on the Edge (part one)

Islands on the Edge (part two)

Thanks to the LO-TCO for their support of this seminar.