Naomi Klein & Jeremy Corbyn: solutions to the climate crisis and the role of trade unions #JezWeKlein 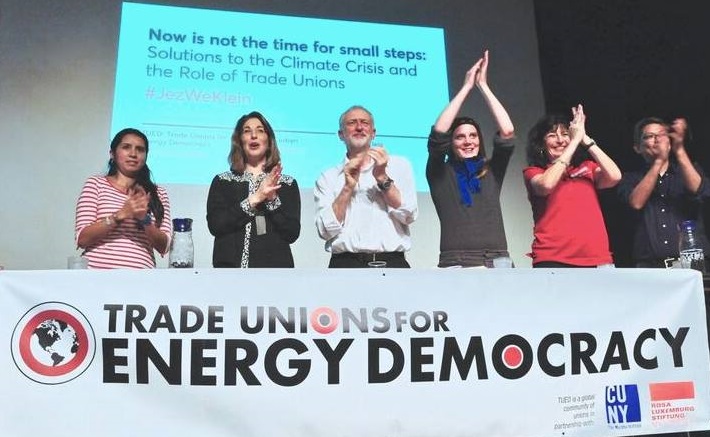 Naomi Klein and Jeremy Corbyn (UK labour party leader) spoke to a full house on Monday in Paris to discuss solutions to the climate crisis and the role of trade unions‘ . As a member of Trade Unions for Energy Democracy (TUED), the ITF co-sponsored the event which took place during COP21.

Naomi Klein’s book This Changes Everything: Capitalism vs. the Climate urges social movements to see themselves as agents of social transformation and calls for a far-reaching democratization of economic life. Jeremy Corbyn is the recently elected UK labour party leader and trade unionist.

Sean Sweeney from TUED opened the event. He called unions to act together to demand a transformation of society – for social ownership and democratic control of energy.

Jeremy Corbyn said he was “a proud trade unionist and [that] organised labour is fundamental to what we believe in”. He used the one million climate jobs UK booklet to show that climate action will be a jobs generator. Jeremy called for an “opening up our imaginations” to create the world that we want, a world that is both radically different and radically better than the one we have right now. A sustainable world where energy and public transport come from renewable sources and are democratically controlled.

Naomi Klein spoke on the critical role of trade unions in winning climate justice – “we need unions to be anchor institutions in this fight for just transition”. She criticised the COP21 negotiations as the emission reduction targets will be much less than what is needed to stop a 2 degree rise in temperature. She called for investment in public services and public transport to build a low-carbon economy, stating that “We have a once in a century opportunity to build a fairer economy with union jobs. Now is not the time for small steps, but the time to leap!”

Also on the panel were union representatives from PCS UK, New York State Nurses Association, SENTRO Philippines as well as the Transnational Institute. They gave brief comments and a question for the speakers.

Both Naomi and Jeremy called for a just transition and the need to build broad alliances. They encouraged trade unions and other organisations to join together to build a better world through hope, imagination and optimism – “Lets go home and organise!”

Read comment and reaction about the event in the Labor Herald, Naomi Klein in the Huffington Post, Trade Unions for Energy Democracy and Democracy Now.