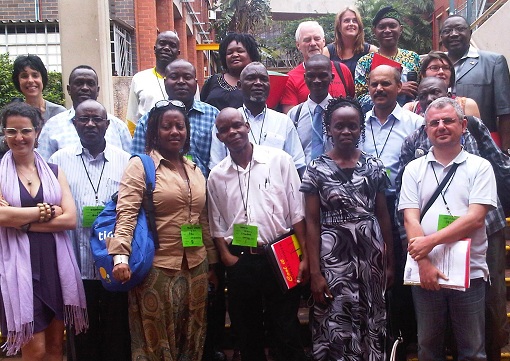 Running in parallel with the UN climate change negotiations at COP17 in Durban, the ITF’s first African seminar on transport and climate change sought to discuss and advance the trade union perspective on climate change. Over 60 delegates from 11 countries in Africa plus affiliates from around the world attended the seminar as part of the ITUC’s World of Work (WoW) programme.

Session 1: introducing climate change. The first session was aimed at shop stewards as an introduction to the climate change struggle and was run by SustainLabour. The session benefitted greatly from the international perspective provided by the ITF affiliates and the contribution of local members from SATAWU, NUMSA and NUM.

The ITUC then provided a summary of the role of the UNFCCC, COP17 and previous COPs before it, the IPCC and the ITUC’s call for a ‘just transition’.

The afternoon sessions provided the opportunity for further debate to deepen and develop our trade union perspective of climate change.

Session 2: Developing our political perspective. The panel members, Asbjorn Wahl (chair of the ITF working group on climate change), Kemal Ulker and Patrick Bond opened the discussion with presentations which will be available to download, looking at ‘socially just climate change policy’, the limits of capitalism to deal with environmental problems and the socially and environmental injustice embedded in the current system respectively. In the discussion that followed, there was agreement that if we accept the science, then as trade unionists, we commit to major and radical transformation to the global economy and politics.

There was debate on what is meant by ‘just transition’, what are the immediate steps that unions can take and how do we define our vision of climate change? There was agreement that for unions to move forward on climate change, workers need to understand the issue and how it may affect them. Many of our members are employed in high-carbon, high quality jobs and are fearful and so need an understanding of how it is possible to move from a high-carbon economy to low-carbon economy.

We need to develop an alternative trade union vision for low-carbon transport, by thinking about what we want as workers and for our communities. We should think about transport in a broader context, not just as the movement of people and goods, but also the environment around us, so that we are able to walk and cycle to work and not live and work with constant congestion and stress. We should not just talk about the right to development, but also about the future that we won’t get to, if we don’t make changes now. We do have to decide what really constitutes ‘the good life’ and not push for development that increases inequality. It is an exciting challenge for us to demand what we want for the future and how do we get there.

How can we build alliances, with organisations that we might not share all the same interests? As unions we don’t have the capacity to respond to climate change on our own, but need to plan how and when we should align social movement. Environmentalists sometimes call for the closure of car plants and coal mines, but particularly those in the environmental justice movement are well aware of the social and worker issues. In addition we also need to consider if and when we might collaborate with the progressive business industry.

They outlined three stages that transport unions may go through when working on climate change.

They explained the reduce-shift-improve model that was developed as part of the work on climate change for ITF congress last year. They highlighted that there was a deliberate decision to focus on the reduce and shift elements, in addition to improve, partly because government and business tend to push the ‘technological fix’ model anyway, but also because of the added benefits that reduce and shift bring, such as reducing congestions and road traffic collisions.

Cheap transport is the basis of the global economy, which depends on just in time production, low labour costs, and oil subsidies. However, the costs of cheap transport are felt by workers in the way of precarious work, long hours, lack of safety precautions and climate change. By reducing the unnecessary movement of goods and people, emissions will also be reduced.

The subsequent discussion raised a number of important issues:

The solutions to the environmental crisis are all interconnected and we have the technology already. We need to mobilise around the solutions we think can work, and not tie ourselves to the solutions told to us by business and politicians.

This created the framework in which participants could begin to think about the employment-related aspect of climate change, in preparation for the next day of the seminar.

Thanks to the LO-TCO and FES for the support of this seminar.